When the bad guys run, the good guys need to chase them – and fast.

And, as the speed and sophistication of the bad guys’ vehicles evolve, so too do the cars of choice for our spy and cop heroes, as Fords become Ferraris. We present for your petrolhead delectation a small selection – new car smell optional. 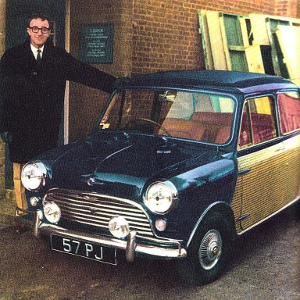 Actor and comedian Peter Sellers paid around four times the purchase price to customize and upgrade his Radford Mini Cooper – and thus started a celebrity trend that included all of the Fab Four. Mini Cooper launched the Radford in 1960 as a beefed up version of the classic Mini and intended it as a car for travellers with an elongated body – perfect for luggage.

Keen-eyed viewers will spot that very Mini driven by a naked Inspector Clouseau in A Shot in the Dark (1964) – and an even more keen-eyed John Lennon not only spotted it but went out and purchased his own model. It turns out that Clouseau set some trends!

Rootes, a British company, launched the Sunbeam Tiger sports car in 1964 at the New York Motor Show as a more powerful version of their Alpine series (James Bond’s first movie car in Dr. No (1962) and its most famous incarnation featured in the 1960s TV show Get Smart.

Formula 1 champion Jack Brabham first proposed the modification to Rootes and the company worked with manufacturer Carroll Shelby (who made a successful conversion for the British AC Cobra) and racing driver Ken Miles to make a prototype in secret.

The power came from the Ford V8 engine which only just fitted inside the car – Rootes tweaked the suspension in an attempt to decrease the weight of the engine. In fact, due to the engine’s bulk, the Smart production crew used an Alpine to house the retractable machine gun used by Maxwell. 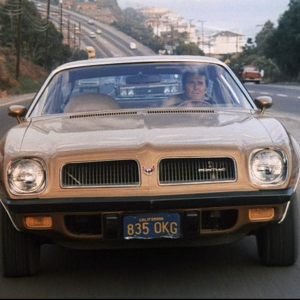 Pontiac launched the car in the late 60s as part of the so-called “Pony” line of cars – others included the Mustang.

Garner gave the sports car with the big body a unique and literal spin when he started the famous and rapid rear wheel motion which featured as much dust as the California desert could produce!

In a later twist Pontiac upgraded the Firebird to the equally famous Trans-Am that Burt Reynolds used to transport illegal hooch across the States in Smokey and the Bandit.

Although classified as a touring car, the P1800 was still a nifty two-door sports car with racing credentials, launched by Volvo in 1961 to compete in a wider international market.

Featured as Simon Templar’s car in The Saint, the show’s star Sir Roger Moore also owned one (as did The Who’s Roger Daltrey), with Moore stating:

I have a great affection for the Volvo P1800, as, of course, I owned one, as well as used one in the series. It’s a beautiful car and I still drive a Volvo to this day.

A 1966 model of the car holds the Guinness World Record for mileage, a staggering 26,000, and Corgi produced toy versions for Saint fans. 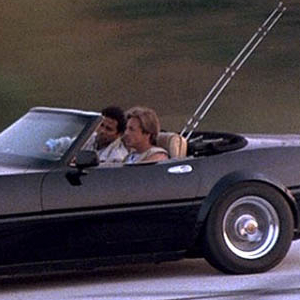 Back in the 80s I bought Rolling Stone magazine on a near religious basis and read it from cover to cover.

A modest-sized advert tucked away in the classifieds at the back struck me as unusual but I didn’t make any significant connections until Miami Vice aired from the middle part of the decade. The show centered around two vice squad detectives, Crockett and Tubbs (played by Don Johnson and Philip Michael Thomas) who dealt with the higher end of organized and street crime – gangs, underworld bosses, extensive drug and prostitution syndicates.

For the first two series, they favored the Daytona and later moved on to a Ferrari Testarossa and a Cadillac Coupe de Ville – the season 3 switch came because Ferrari didn’t like the Daytona chassis used on another vehicle and threatened to sue. Nevertheless, I couldn’t figure out how vice squad detectives, no matter how suave or how 80s, could afford such luxury cars. And then I remembered that little ad in the back of the Rolling Stone…

When cops, vice or otherwise, arrest villains they impound all their worldly goods and turn them over to the Government for public auction – the advert detailed those auctions – and so what better way to chase the bad guys than in their own damn cars, bought at a knock-down price. Clever, no?

This later led to a spate of news stories where innocent and hapless members of the public bought luxury sports cars for pennies at such auctions and then ended up either under arrest or chased by villains because everyone thought they were actual drug dealers. Ferraris look suspicious on a council estate, kids.

The Bullitt car chase through San Francisco and down Lombardi Street ranks among the top three in cinema history.

The production crew used two separate Fastbacks in a scene that, although impossible to achieve with that geography in real time, lasted just under 11 minutes. And Steve McQueen was no slouch when it came to driving fast.

An accomplished motorcycle and racing car driver – he competed in the British Touring Car Championship of 1961, amongst others – he performed many of the close-up stunts for the film.

Max Balchowsky, a former racing car driver, modified the vehicles, which topped speeds of 110 miles per hour during filming and resulted in extensive damage.

The cars were later scrapped as they were beyond repair. 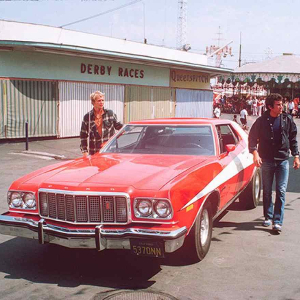 I lived on a council estate from the mid to the late 70s, and a rather misguided chap from the maisonettes next door bought his own Ford Gran Torino complete with custom paint job – a white body with a tomato red stripe along the length of it. Oops.

Of course, the iconic 1975 Torino in Starsky and Hutch displayed the real and distinctive paint job with the colours proper and reversed. Ford launched the line in 1968 and improved and modified the cars with every passing year – the 1975 version featured a new steering wheel design and a catalytic converter courtesy of the Federal Clean Air Act.

It fell into the category of muscle car due to its weight and Ford tweaked the engine to offset the energy converter but the whole car still carried a certain heft and power about it.

Considered a mid-size vehicle it wouldn’t have been out of the reach of a Los Angeles detective’s salary. We presume Starsky got a good deal on the custom paint via Huggy Bear and word on the street tho!

Of course, we saved the best until last…

In the Bond novels Ian Fleming gave 007 an Aston Martin DB Mark III – in Dr. No (1962) he drives a Sunbeam Alpine, and in From Russia With Love (1963) he replaced that with a Bentley Mark IV.

It wasn’t until Goldfinger that Bond got to drive the now famous DB5, which went into production as they filmed the movie.

Our list contains prettier cars and faster cars but nothing compares to the moment in Goldfinger when the iconic silver-birch chassis opens up to unleash its concealed weaponry.

Not for nothing do fans call it the most famous car in the world – often imitated, never bettered.