A secret agent needs a bombastic name. Natural forces like thunder, lightning, and storm rank well. You could also add speed, jet, rock, flint, and hazard to the list. And dependable Christian names like James, Richard, and Simon go with the general mix. 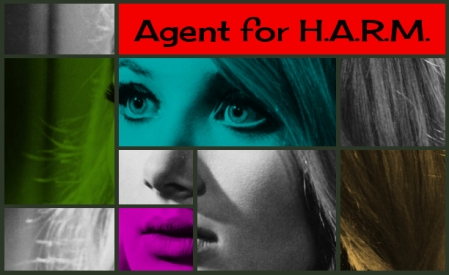 So, Agent for H.A.R.M. (1966) screenwriter Blair Robertson no doubt thought he coined a winner when he christened his eponymous spy hero Adam Chance – the first man ever created and one who takes risks. Got it in the bag.

Except for British television company ATV launched one of the worst soap operas in the world, Crossroads (1964 – 1981) a mere two years earlier and nestled among the hackneyed cast lay the dry wave, mustachioed, ever so suave accountant Mr. Adam Chance (played by Welsh actor Tony Adams). Coincidence? Perhaps.

But first, let me give you a flavor of the nonsense that was Crossroads. 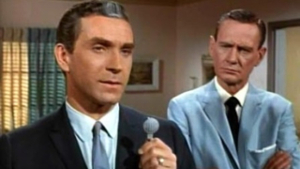 Set in a roadside motel in the heart of the British Midlands, the show centered around the staff and occasional travelers to this fine establishment with its wonky sets, missed cues, and really terrible acting.

On top of that, a good 75% of the characters had thick Birmingham accents – not the most glamorous of accents at the best of times – and some of the most convoluted plots ever to grace TV screens.

We had middle-aged Brummie kitchen worker Amy Turtle mistaken for the glamorous Russian spy Amelia Turtleovski for example. I’m not even making that up. The list got ever more ludicrous until the networks axed the whole thing in the 80s.

But, back to that other Adam Chance – the one who really did work as a spy.

Try as I might, I couldn’t shake the memory of Crossroads or Tony Adams smug face as the other-other Chance.

Both men are far too old to be schmoozing around nubile young ladies – here in H.A.R.M. actor Peter Mark Richman sleazes around the fragrant Barbara Bouchet whose baby face and dolly bird demeanor coupled with a constant display of bathing suits and not much else put it firmly in a very dodgy territory.

Chance is an agent hunting down the criminals who have stolen a virus capable of eating human flesh. Bouchet plays the long-lost niece of the scientist who invented the whole slimy goo gun and there are various bad guys lurking at various times around a beach hut. 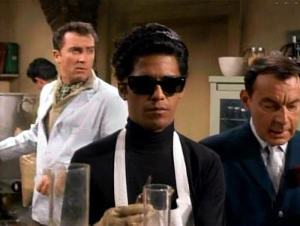 And they continue to lurk around the beach hut. From time to time Chance and Bouchet venture about three feet onto the beach, and then head back to the hut. The bad guys fire shots and miss Chance. Chance fires shots back and get direct hits. All this takes place in and around, behind and in front of the beach hut. The beach hut really should have a starring credit.

The virus gets destroyed, the bad guys lose, Bouchet turns out to be a double agent, the film ends. Or does it?

Universal Pictures intended H.A.R.M. to continue on as a TV series and, in fact, the movie stood as the television pilot.

You can see this in the reliance on limited and native locations, and site-specific action sequences. Even the secret agent devices like Bouchet’s two-way radio seem low budget in comparison to similar spy movies of the era. H.A.R.M. is a very long, very tedious, very silly TV pilot and nothing more. As Crossroads gets limited to a pedestrian motel in the middle of the British Midlands, so too does H.A.R.M. find itself stuck in a pedestrian beach house somewhere on the California Coast. Same method, different countries. 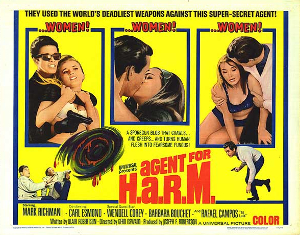 To my eternal amazement (and my late grandmother’s eternal joy) Crossroads became a long-running thing – H.A.R.M. did not.

Not glamorous enough to compete with the likes of Bond, and not polished enough to run alongside the likes of The Avengers, the TV pilot that should have been ended up as the TV show that never was.

It gained a certain notoriety along the way, mind you, with a revival of interest in our favourite show Mystery Science Theatre 3000, and a long-running gag which featured one of the henchman’s resemblance to the late singer Prince.