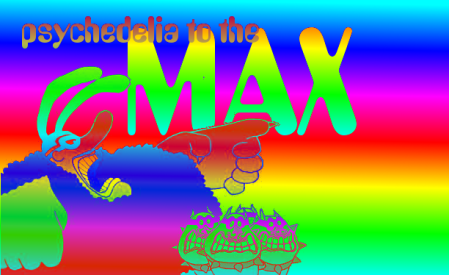 Part cartoon, part nightmare, the undeniable Sixties vibe still has the power to startle after so many decades. I grew up surrounded by these images on posters, in adverts, in my parents’ friends’ apartments, and like all keen artists squirrelled them away in my subconscious for later revival. 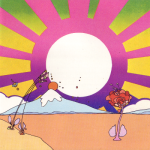 PSYCHEDELIC: There’s a definite acid head frenzy going on here, whether actual or conjured, with clashing fluorescents, undulating curls and swirls and the dreamlike state. Max (born Peter Max Finkelstein in Berlin in 1937) not only has a keen interest in astronomy but is credited with the introduction of Yoga to the United States, his adopted home. A personal invitation in 1966 to Satchidananda Saraswati to come stay with him in New York led to a permanent residency, the founding of Integral Yoga International, and culminated in Saraswati opening the Woodstock Festival in 1969. Max is nothing if not the quintessential hippie. (His children go by Adam Cosmo and Libra Astra.)

EERIE: the undulating backgrounds of swirls and rays, the marshmallow puffiness of people and animals, the blinding flashes of clashing colours – this is the stuff of very bad dreams and very bad trips both with a sweet sugar coating of chocolate and sprinkles. Are you awake or asleep? High or sober? Noted for his inclusion of the full-colour spectrum in everything he does, Max is also a passionate ecologist, vegan, and social activist.

TENSION: somewhere between a cartoon and a nightmare, there is a wonderful tension in the artwork that is both appealing and terrifying, rather like the poisonous liquid shapes of art nouveau – a dangerous beauty. Max’s family lived in Berlin during the rise of the Nazi Party and fled shortly after Peter’s birth. They lived in Shanghai for a decade and then Israel before a short stay in Paris led them to their final home, New York. Max always said that Paris fostered his love of art, but you can’t help but wonder if the previous years gave his art a restless and slightly sinister flavour.

ENDURING: you can see echoes of Peter’s work today in graphics, interiors and children’s cartoons with an enduring legacy of bombastic colour and bold shape over a slightly scary undertone. He serves as the official portrait artist for the Statue of Liberty and his portfolio includes commissions from the United States Postal Service, ASEA of Sweden, the 1994 World Cup, the Grammy Awards, the Rock and Roll Hall of Fame, and the Super Bowl. But here’s the kicker: in spite of everything you’ve read, and in spite of everything Peter Max himself has said he never contributed a single brushstroke to The Beatles’ Yellow Submarine. There exists not a single scrap of documentary evidence and no one who worked on the film recalls his contribution. And yet such is his artistic influence Yellow Submarine is the thing he’s most famous for.

REDUCTION: So much information and detail are conveyed by so few lines. The real art director for Yellow Submarine Heinz Edelmann takes Max’s collage blocks and full spectrum details and runs with it. The Beatles are pretty much solid blocks of colour, but you instantly know which Beatle is which. That’s genius. He might not have ever set foot inside the Submarine production studio but you can spot his influence a mile away. And what an influence it is!