The British Public Information Film (aka PIF in the UK, or PSA in the US) seemed to start out as a simple series of informative films that could warn you about how to prevent the spread of germs, through to how to be a good wife for your husband. 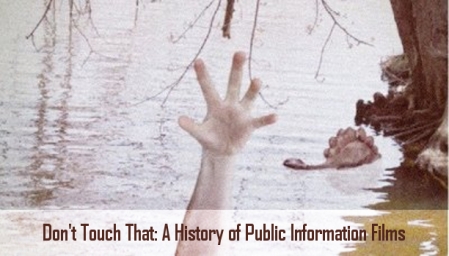 Made variously by the Ministry of Information during the Second World War, and then later by the Central Office of Information and private contractors, they were provided free of cost to cinemas and television stations for broadcast during ad breaks, particularly during children’s programmes.

But sometime in the late 1960s and early 1970s they transitioned and began to favour the use of fear to inform. Since then such films have left an indelible mark on the public consciousness like some authoritarian blood fingerprint on the mind.

Stark, cold, and unfeeling these mini films left you hollow inside as a kid and you awaited seeing them again as warmly as you would be called by your dentist for your turn in his big black chair.

Take the Keep Britain Tidy campaign. The 1975 PIF starts out with a shot of a British street: Jerusalem plays in the background. But the street looks wrong: bubonic, dark, an utter depressed atmosphere which communicates a warped gravitas. The streets look… strange. You can’t tell if the High Street had been victim to a cataclysmic flood, snow fall freezing an entire city to death, or if a neutron bomb had killed all the people and left only silence and deathly irradiation in its place.

There are no people in this PIF. Somehow the sheer mass of refuse has destroyed everyone.

Keep Britain Tidy the voice over tells us – this is a public information film on littering. And this is the crux of the issue for me with PIFs – they present a genuine problem, something we should all be aware of and do our best to address, but they inject it with a terrifying cocktail of rabies, nuclear war, paedophiles, and a mad dystopian future Britain.

So, like many people, my childhood was thus preoccupied by the terror of electric pylons, having my foot crushed on an elevator, being snatched by a paedophile promising puppies, or suddenly finding myself hooked on heroin and having my face turn weird. The power and the terror of these PIF messages made me believe I would be more likely to die before my tenth birthday.

“If you want to have fun and stay alive, keep away from overhead power lines – then you’ll know you’ll be playing safe,” intones Brian Wilde in Play Safe from 1973, one of three films made about the dangers of electric power lines. The risk of early death while flying a kite was apparently quite common in the early 1970s.

It’s a wonder that any small child or pre-teen ever left the house from then onwards to be frank, as the world teemed with unseen dangers in the smallest and simplest of things, because PIFs did not only warn us about the obvious threats to our everyday lives or the things that could happen that could seriously endanger us.

Like a bored child on Halloween PIFs also got their kicks from scaring us about things for the sake of it: 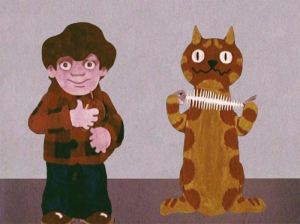 But the stand out Top Three that everyone remembers are the true heavyweights of How to Scare the Crap Out of a Child:

Charley Says (1973) – Yes, that Prodigy song. On the surface, we see a series of six whimsical cartoons that feature a boy and his cat. The boy does not appear to possess a brain cell as he powers through a slew of dangers, with only the cat to warn him. This starts to feel more like a PIF about what happens when you abandon your child and use the cat as a babysitter, to be fair. But to an entire generation of ravers, “Charley Says…” comes complete with a techno beat.

Apaches (1977) – Forget Requiem for a Dream or A Serbian Film: Apaches stands as one of the most soul-destroying pieces of film ever produced. Over the course of 27 harrowing minutes, we witness one child run over by a tractor, one who drowns in a slurry pit, one crushed by a heavy iron gate, one who breaks his neck, and a young girl who dies an agonising and audible death by rat poison. One of the dead children narrates the whole thing, and it ends with a list of children who died in farm accidents in the credits. Once seen, never, ever forgotten.

Lonely Water (1973) – Donald Pleasance, as a dark-robed, Grim Reaper style figure, intones: “I am the spirit of dark and lonely water: ready to trap the unwary, the show-off, the fool…” You could argue that none of Pleasance’s impressive body of horror film work ever came close to the menace and the chills contained within Water. He managed to spoil many a family picnic, and to this day I cannot think of a single friend who feels comfortable around lakes.

But in the world of the PIF it’s not just lakes that pose a threat: and if you think that sharks or Portuguese man-o-war jellyfish are the biggest danger on the beach, think again. The most likely cause of a massive injury will be a broken bottle, as Broken Glass (1973) tells us. (They hammer the point home, again, in Broken Bottles on the Beach (1980).)

Now granted this can be a genuine problem but it’s not the issue at hand that gets to me with these films but once again the way it’s presented and no pun intended the way it’s cut.

Here we have a depiction of a small boy running in the summer evening’s sun, joyously enraptured by his innocence and love of the simplicity of his infant life. Yet all this comes into sharp deathly focus as he leaps into the air, the camera strikes to an image of a broken lemonade bottle, and then the screen quickly dresses in black.

It feels like we’re supposed to imagine that he died!

Maybe the bottle was placed on top of an unexploded World War II landmine, and that there was huge blood loss? Then again it could have been something as simple and reassuring as a complex set of infections that led to a slow, painful, and lingering death.

We may never know.

Even if our young friend survives the ordeal of the broken bottle, he still has to face the beach entertainment, and this is where the makers of PIFs start to take the piss. In one of a series of stranger danger films Strangers: Mr Punch (1980) we see a group of children sat at a traditional Punch and Judy show in a lighting that can only be properly described as Fit for Murder.

They watch the show and laugh. The voice over informs us that at some point we must tell our children about the darker side of life, even though it is unfortunate that we must do so.

Then we see an alligator driving a car, speaking to a macabre and glossy Mr Punch in an effort to entice him into the car. Why you would want a deformed sadist in your car is anyone’s guess, but when have alligators been known for their astute judgment?

Mr Punch proceeds to batter the alligator in that way of his that makes abject violence fun for kids. They do all indeed laugh. Then suddenly we see a policeman, and obviously, because this film is a work of fiction, he is there on time.

With his deep Cornish accent, Rubenesque features, and the sort of paintwork that probably hides a code to animate all the toys in your bedroom to dismember you he makes this statement: “Now then, now then. Always remind your children about the danger from strangers, but do it in such a way so’s that you don’t frighten ‘em!”

Assuming they haven’t been scared witless by:

I don’t know about you but I find it hard to take tips on social morals from Mr Punch – a man who beats and kills his wife, and a policeman who sounds like a notorious DJ turned child predator. It is indeed sane to warn your kids about strangers. That’s not the issue. The issue is the method and the execution of the message.

And that’s where things go wrong with a serious subject that is presented in the vaguest of ways in Rabies Means Death (1983). It is interesting to note that even when watching the film address the disease the viewer is never informed of what it actually is. What you are told is that it is fatal, that it “means death”, but you don’t know what “it” is.

You get the hint that the disease is new and apocalyptic in scope. That should just one single animal sneak in or get smuggled into Great Britain it will unleash mass death on the scale of the Bubonic Plague, though this time it would be a foaming madness that would destroy you, and not just a few black boils and a silent passing. I’d prefer black boils to a mushroom cloud, mind you…

As we are only too well aware, the 1980s ratcheted up the tensions of the Cold War to the extent that the British Government thought it prudent that the nation needed something to cling on to in the vain hopes that nuclear conflict could be something a family could survive. Thus a total of 20 Protect and Survive films were created: a selection of the most mortifying animations ever produced. An assured yet cold voiceover instructed the viewer what to do in the event of a nuclear attack, how to construct a shelter by using interior doors and sand bags, how to prevent yourself getting a fatal dose of fallout, and how to label your dead family member and stuff them into a bin liner.

This was the ultimate PIF: the one that addressed the destruction of human civilisation.

Protect and Survive came with the proviso that it would only be transmitted when nuclear war seemed highly likely: within the space of two to three days of destruction, and so thankfully never saw the actual public broadcast. (It’s when you hear the air attack warning, not if…) The closest we ever came to such a thing on television was the infamous screening of Threads, and as the equally infamous introduction to Frankie Goes to Hollywood’s Two Tribes.

PIFs run the full gamut of a portrait of dystopian Britain, and include:

It can’t just be me thinking this: sleep well.

One thought on “Don’t Touch That! A History of Public Information Films”